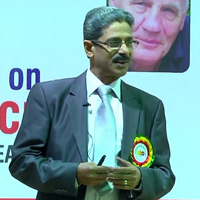 In 2017 Dr. Varghese completed the Specialty Course in Predictive Homoeopathy (S C P H), and in 2018 and 2019, SCPH PLUS courses, conducted by the International Centre for Homoeopathic Medicine with United Nation (E C P D), University of Peace.

Dr. Varghese is a practitioner of Classical Homoeopathy in India.  He is the Founder General Secretary and an the International Homoeopathic Teaching Faculty of the Institution of Homoeopaths Kerala. He taught about the importance of Miasms in Homoeopathy practice in Kerala and outside the state in India and Abroad.

It was in 2008 that he first heard about the medical discoveries of Dr. Ryke Geerd Hamer. Dr. Hamer’s ground-breaking research immediately captivated his interest. After immersing himself in the studies of the GNM Tutorials, he attended the Advanced GNM Workshops, International GNM Conferences, he also presented several case studies from his clinical practice. German New Medicine® has now become the foundation of his Homoeopathic Practice with a very high success rate in all cases including cancer.

GNM is not only a science, it is an understanding of life itself.